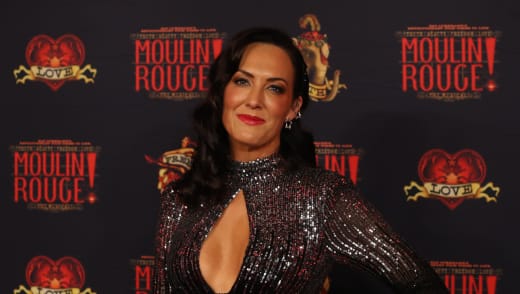 Lottie’s present-day presence was non-existent during the first season, but the character was a big part of the flashbacks on the show.

Fans waited with bated breaths as details spilled out about Lottie, and we learned in the twisty season finale that Lottie was alive.

“What the hell have you gotten me into?” Suzie said in a voicemail to Natalie.

“I think someone is following me. Who the f—k is Lottie Matthews?”

It was a bonkers reveal that really raised more questions.

And, there will be more teen Lottie, too. Courtney Eaton has been upped to series regular for Season 2.

Earlier this month, it was revealed that Lauren Ambrose would be taking on the role of Adult Vanessa “Van” Parker.

In addition, Liv Hewson (Santa Clarita Diet), who plays the teen version of Van, has been upped to series regular in season two.

Yellowjackets Season 2 is probably still a long way off because the series has yet to return to production.

Co-creator Ashley Lyle opened up about the highly-anticipated return in an interview with The Wrap.

“We’re looking into the first quarter of 2023,” Lyle shared.

“We are on a very similar production track in terms of time as we were last season, although of course, we have to shoot an additional episode because we had already shot the pilot the last time.”

Production is slated to conclude in February.

“We’ll be airing sometime shortly after that,” according to Lyle.

The series has been a massive success story for Showtime, landing a quick second-season pickup.

“Yellowjackets has been an unadulterated sensation for Showtime,” said Gary Levine, co-president of entertainment at the premium cabler.

“We are overwhelmed by both the acclaim and the audience response to our series, including several ‘Best of 2021’ lists, a 100% score on Rotten Tomatoes and snowballing viewership. Clearly there is a hunger for originality and audacity, and our incredible showrunners Ashley [Lyle], Bart [Nickerson] and Jonathan [Lisco], along with their pitch-perfect cast, have delivered that and so much more.”

What are your thoughts on the latest casting news?

Mallory Jansen Talks Francesca Quinn PI, Playing a Cop, and Plots Her Own Hallmark Film
‘The Chosen One’ Millarworld Netflix Series: Everything We Know So Far
‘First Love’ Romantic J-Drama Series Coming to Netflix in November 2022
Monarch – Episode 1.05 – Death and Christmas – Press Release
‘Today’ Al Roker Has Had Enough Of His Co-Hosts
Follow us on Facebook
Follow us on Twitter