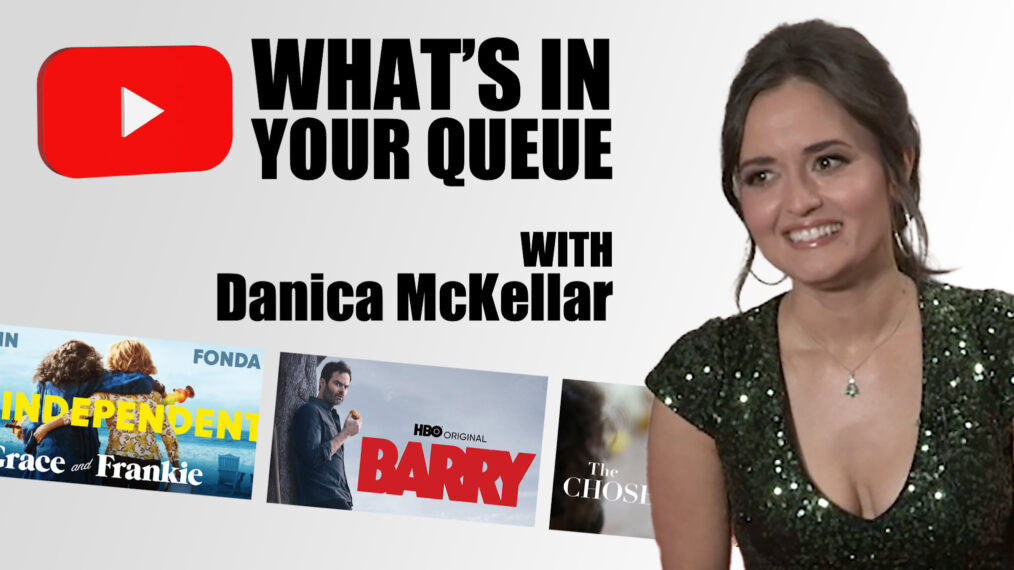 Danica McKellar‘s newest holiday movie, Christmas at the Drive-In, premiered November 25 on Great American Family. But what is The Wonder Years alum watching when she’s chilling at home with her family?

McKellar popped by TV Insider’s offices to share what’s on her watch lists, and it’s truly a mixed bag of stories you wouldn’t think of grouping together. The top priority on McKellar’s watch list is finishing Grace and Frankie on Netflix.

“We have three episodes left, and it’s so good,” she tells us. “It’s just a really sweet show.” McKellar’s been a fan of stars Jane Fonda and Lily Tomlin for years, and she even shared some scenes with Martin Sheen back on The West Wing after wrapping up her time on The Wonder Years. But even after seven seasons of tuning into the beloved comedy, McKellar can’t decide who her favorite character is — Fonda and Tomlin’s performances are just too good to pick one (Grace and Frankie are a package deal, anyways).

The star tells us she and her husband have been putting off watching the last three episodes because they don’t want the show to be over. Understandable. But she says Dolly Parton‘s cameo will surely get them to watch sooner rather than later. (She did star in Christmas at Dollywood, after all!)

Next up: Barry. We definitely did not have a former Hallmark star loving the HBO show about a paid assassin on our 2022 Bingo card! But honestly, the taste jumped out.

“That is truly just an amazing show,” she says above. “We’ve only watched the first two seasons, but the whole premise of assassin-turned-actor is hilarious. For me, I love any show about the business because I find it really relatable and there’s always inside jokes. Bill Hader is a genius. This is kind of a new genre for us. We don’t really watch a lot of crime shows.” She adores the acting class scenes with Henry Winkler‘s self-important acting teacher character as well.

The third and final thing in McKellar’s queue is the last thing you’d expect someone to watch after Barry, and that’s The Chosen — a crowd-funded series telling the biblical story of Jesus Christ. Season 3 premieres December 11, and McKellar enjoys it because of its “heartwarming,” “relatable” nature, and she’s impressed by how it got made.

Watch the full video above to learn more about why these shows made it onto McKellar’s queue and stay tuned to TV Insider to see more of your favorite stars gushing about their current TV favs.