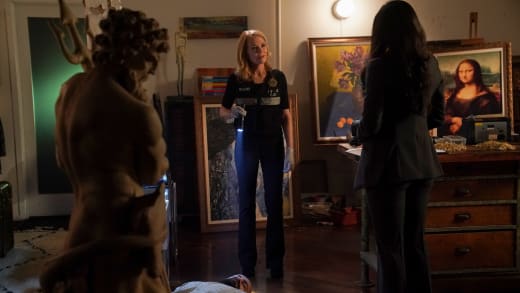 Phew. That was close.

When the ongoing storyline gets wrapped up, that has been a signal for the original star(s) to depart. It happened with Grissom and Sara after CSI: Vegas Season 1.

Fortunately, that didn’t happen with Catherine. Instead of taking a dramatic step to work on her relationship with her daughter, she opted to remain as criminologist emeritus at the Vegas lab.

This way, the show keeps one of the strongest characters from its original run in a prominent role. Then Catherine can take a weekend in wine country with Lindsay instead of leaving for an extended tour of Europe with her. Baby steps.

They can’t lose a woman who can drop into an unfriendly foreign country without any official sanction and blackmail a foreign mobster into returning to testify about Grace’s murder.

Even with Catherine being well off, how realistic was that?

While Catherine had Mikel up against the wall with evidence of all his misdeeds, she should have been more suspicious of his motivations.

He gave in way too quickly. Of course, he had a dodge, which turned out to be faking being poisoned to escape Catherine and his legal troubles.

You would have thought that a foreign mobster would have been able to call in some favors. Instead, both he and his forger nephew ended up murdered.

One dirty napkin was all it took for Beau to unearth an old gas station, which turned out to be where Mikel had hidden Grace’s body.

If there had been doubt about Grace’s fate, that sealed it. And Catherine’s pain was evident on her face.

Sonya pulled an odd caliber bullet out of Grace, one proven to match those extracted from Mikel and Anton.

Most memorably, it was Grace herself who provided the most crucial clue to solving her murder. That came in the form of a moist piece of wadded paper that she had shoved into her mouth when she realized she was about to be killed.

It was easy to feel sorry for Beau, who, after trying multiple methods, could only extract Catherine’s phone number from the paper.

But when he and Catherine put their heads together, they determined that Grace had left them a sketch of a famous painting by Van Gogh, a forgery of which had been splattered in Mikel’s blood.

Only, at second glance, the team discovered that they had had the original, priceless artwork in their possession this whole time.

A hilarious scene in a very serious episode happened when Beau was fanboying the FBI expert brought in to authenticate the painting. Beau may be the biggest nerd in an entire lab full of nerds.

That gave Catherine license to take another run at casino executive Aziz, who she believed was using the casino to launder dirty money from foreign mobsters. Aziz was smarmy enough that he deserved any abuse she sent him.

What they had discovered about the forgeries led to the question of how many more fakes were in the casino’s art gallery. This discovery led to their gaining access to more of the casino’s surveillance footage from the night that Grace disappeared.

The squad’s initial sweep of the video revealed the killer, the casino’s security chief, Frank, who would have to have been in on the art scam. But when he lawyered up, they had to find another way to uncover who ordered him to kill.

So it was back to footage, where Chris discovered more missing frames, this time of a utility room behind the gallery.

Also, Catherine uncovered the answer to a piece of evidence that had been frustrating her, a small piece of tortoise-shell found in Grace’s empty grave. There was a broken tortoise-shell compact in the box of Jodi, Catherine’s source, who Aziz had fired for helping her.

It was time for one more full-court press as the criminologists hit that utility room. All it took was another piece of tortoise shell, and a dropcloth with Anton’s paint smeared on it to help Catherine construct her narrative of how Grace had stumbled onto the forgery operation.

It should be a rule: be suspicious of whoever is being helpful inside of a hostile institution, in this case, the Eclipse. Jodi, who was running the art scam, was leading Catherine on, keeping her a step behind in her investigation.

It was hard to be sympathetic toward Jodi, whose rationalization was that she was using the money laundering to make her mark at the Eclipse and that she had to have Grace killed to keep her operation from being exposed.

It was heartwarming at the end to watch Catherine and Jen compare notes about how it felt to have curious, questioning daughters.

Are you happy that Catherine is hanging around the lab?

Did she make the right decision?

Did you guess that Jodi was the big bad?

Amy Robach & TJ Holmes Celebrate ‘GMA’ Firing?
All American – Feel It In the Air – Review
Kanye’s Ex, Juliana Nalu, Is All Legs In Micro Leather Shorts
Should You Watch ‘You People’ on Netflix? Our Play, Pause, Stop Review
Is Elvis’ Granddaughter Riley Keough Really Singing In ‘Daisy Jones & The Six’?
Follow us on Facebook
Follow us on Twitter